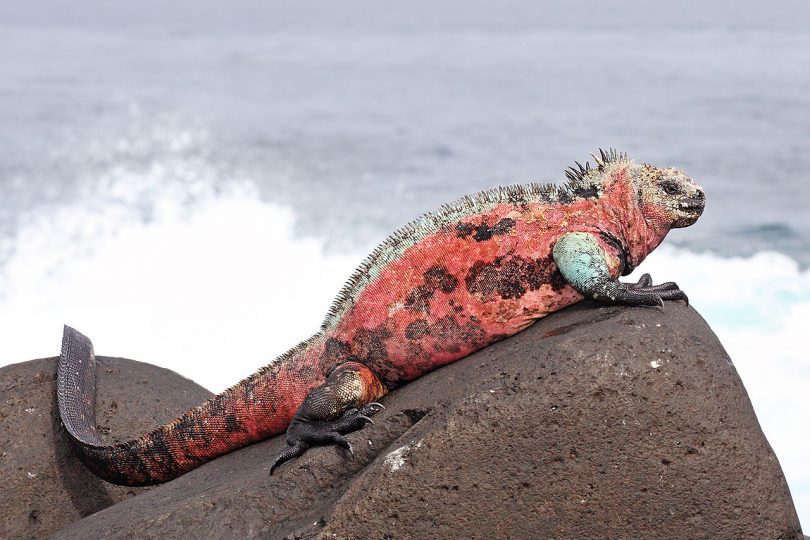 Because Española is one of the most remote islands in the Galapagos, it is inhabited by several unique species, including the Espanola mockingbird, the Espanola lava lizard, and the waved albatross.

This is the only spot on the earth where Waved Albatrosses nest and reproduce each year. There are also big colonies of boobies and other sea bird colonies, as well as the famed ‘Soplador’ blowhole. The seas surrounding Española Island are extremely rich in marine life and ideal for snorkeling or sea kayaking.

In this article, I will share our exploring experience on Española Island. Find out more about the island’s wildlife and what to see on this isolated island in Galapagos as you prepare for your upcoming trip!

How to Get to Española Island

Española is located in the Galapagos archipelago’s southeast. It is possible to schedule a day trip to Española from San Cristobal, which takes around 2 hours each way. It is, nevertheless, a better idea to visit as part of a Galapagos Cruise program. This allows you to spend more time enjoying your vacation and giving Espanola the attention it deserves.

Upon arriving, we immediately realized the fact that Española had the largest number of endemic species in the Galapagos. The island is inhibited so you will mainly see nature and wildlife in action on the island.

Suarez Point is a famous Galapagos visiting destination. We were dropped off at a little concrete wharf beside a small lighthouse. Even with at our first steps, we felt we were there in the middle of the action.

Sally Lightfoot crabs with bright colors cling to the black lava rocks. Baby sea lions splash about in the shallows. We also spotted an Espanola Marine Iguana (Christmas Iguana) with its distinctive red and green skin coloration. We gathered around to take some photos, although the best is still to come farther up the trail.

After leaving the beach, we followed the trail that leads to the coast. Expect to be bothered by Espanola Mockingbirds; they are fearless tiny birds who are drawn to the prospect of a drink of water from a tourist’s bottle. This is a fantastic close-up animal experience, but it is best to avoid the urge to offer them your drink.

Further on the trail, we walked through a maze of volcanic stones and tough terrain. We caught a glimpse of Galapagos doves or hawks while hiking. Upon reaching the cliff plateau, we reached the heart of the waved albatross breeding grounds, which is definitely a reward for completing this difficult trek.

Every year in April, albatross couples converges to Espanola Island to mate and nest. It is a genuine joy to observe the albatross mating dance and the loving conduct of couples that mate for life. From June onwards, fluffy white hatchlings are common.

As we continued our journey along the cliffs, we were awed by the spectacular views of the ocean and the famed Punta Suarez blowhole (el Soplador).

For me, this is the most amazing portion of the island. When waves crash against a hole in the rocks below, the water rises spectacularly high into the air like a geyser. A huge wave may propel water as high as 23 meters (75ft). It was a truly breathtaking sight that we all admired!

The route descends to sea level via a big blue-footed booby colony. These entertaining birds are known as the Galapagos clowns, and you’ll understand why once you witness their interesting mating ritual. Nazca boobies nest here as well, and Red-billed Tropic birds may be seen soaring along the cliff face. This is the final length of the walkway before returning to the lighthouse beach.

After a brief lunch on the boat, we returned to the island after visiting a different portion of the island: Gardner Bay.

Gardner Bay was named one of CNN’s top 20 beaches worldwide, and it’s easy to see why. A wet beach landing places you directly on a length of beautiful white coral sand with turquoise seas lapping at the coast.

But before you can take in the breathtaking scenery, your attention will be immediately drawn to your unexpected beach companions: a colony of drowsy sea lions. Many sea lions rest or sunbathe in groups, while others swim about in the crystal blue seas.

The popular joke in the Galapagos Islands is how delighted tourists become the first time they see a sea lion up close—then after a few days of touring, they couldn’t care less since there are so many of them!

While tourists are instructed not to approach too close to the sea lions because they are protective of their kids (and personal space), it was virtually impossible to avoid. I placed myself in the gleaming white sand and was quickly surrounded by the critters that sunbathed leisurely without a care in the world.

Our excursion to Espanola came to an end with a brief plunge into the pristine waters near Tortuga Rock, sometimes known as Turtle Rock. The name was derived from the rock’s likeness to a Green Sea Turtle coming up for air.

The best activity on Turtle Rock’s far side is for experienced snorkelers and strong swimmers. Here you may see whitetip reef sharks, manta rays, and a variety of beautiful Galapagos reef species including Surgeonfish, Parrotfish, Wrasse, and Scorpionfish.

The shallow water on the islet is an ideal snorkeling condition. We even spotted a little penguin dashing about among the brilliant tropical fish and an unusual turtle!

Gardner and Osborn islets, which are adjacent to Espanola island, are excellent snorkeling spots. Here, you will see 80-foot sea depths fall along coral cliffs to underwater caverns. These caverns are used as a cleaning and feeding station by eagle rays, manta rays, jacks, Galapagos sharks, white-tip reef sharks, and occasionally hammerhead sharks. Massive schools of bright reef fish rush back and forth between sea lions and sea turtles. On the sandy seabed, look for the rare red-lipped batfish.

There is no exact optimal time to visit Espanola Island in terms of weather. Most of the year, the weather is rather dry. However, the seas off the island are warmer between January and April for snorkeling.

Many people come to Espanola Island, though, to witness the spectacular waved albatross. This intriguing bird is most likely to be seen between April and December, while they are mainly absent between January and March. The birds begin to return in March, so you may see one or two then, and some depart late, so you may see them in January, but April to September is the best time to watch them.

Española Island will take your breath away! We highly recommend adding Española Island to your Galapagos itinerary because it is surely worth a visit.

The scenery of black cliffs and white sand beaches is breathtaking. The species on this island are more abundant and diversified than on any other Galapagos island. Unique animals such as the majestic waved albatross and the bright Christmas iguanas may be found here. The action is non-stop, both on land and water. Espanola island will live on in your greatest Galapagos vacation memories and images long after you return home.